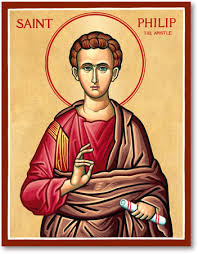 Reading from the Synaxarion:

This Apostle, one of the Twelve, was from Bethsaida of Galilee, and was a compatriot of Andrew and Peter. He was instructed in the teachings of the Law, and devoted himself to the study of the prophetic books. Therefore, when the Lord Jesus called him to the dignity of apostleship, he immediately sought out and found Nathanael and said to him, “We have found Him of Whom Moses in the Law and the Prophets did write, Jesus of Nazareth, the son of Joseph” (John 1.45). Having preached Jesus the God-man throughout many parts of Asia Minor, and having suffered many things for His Name’s sake, he was finally crucified upside down in Hierapolis of Phrygia.

Apolytikion of Apostle Philip in the Third Tone

O Holy Apostle Philip, intercede to our merciful God, that He may…